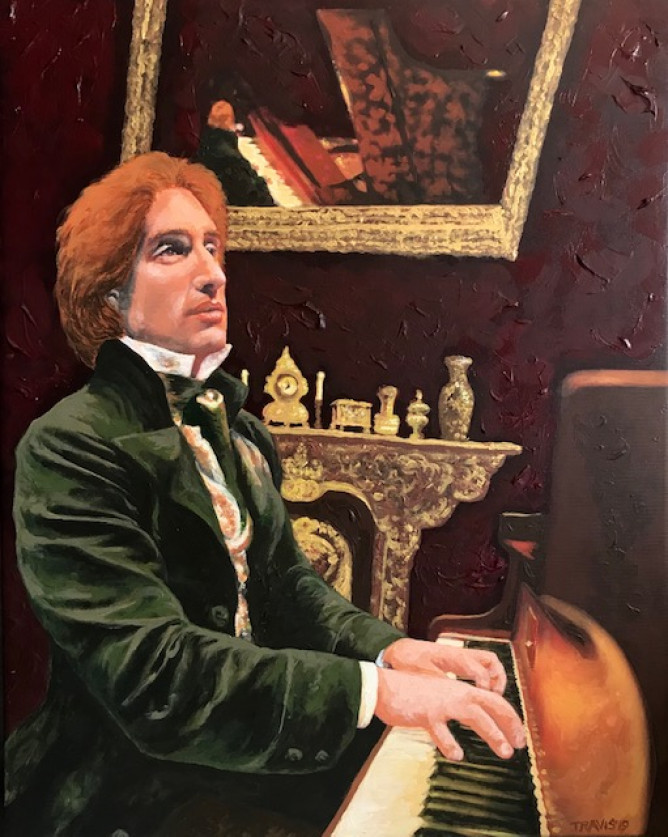 HORRAY! BRAVO! ENCORE! My dear and most remarkable friend Hershey Felder has finally returned to LA from Florence to appear live on the Wallis stage through July 24 after a three-year pandemic-fueled hiatus, bringing another of his glorious "Composer Sonata" solo series to our reclaimed desert climes. Hershey's brilliant CHOPIN IN PARIS explores the romantic story and music of the Polish pianist-composer Fryderyk Chopin, set in the famous composer's salon where he teaches a piano lesson that actually took place in March 1848, just days after the February 1848 revolution. As the piano lesson unfolds, Chopin reveals secrets about the art of the piano and composition, as well as secrets about himself. As always in Hershey's multi-award-winning performances which have toured all over the world, the acclaimed playwright/pianist/actor delves deep into the music and psyche of the man himself, considered by his contemporaries, and now by history, as the true “Poet of the Piano.” Directed by Joel Zwick, CHOPIN IN PARIS features some of the musical genius' most beautiful and enduring music as another contemporary musical genius entertains and mesmerizes us with his insight and unique theatrical style. You'd be NUTS to miss this one.
THROUGH JULY 24 ONLY: Wallis Annenberg Center for the Performing Arts, 9390 N. Santa Monica Bl., Beverly Hills. Tickets: 310.746.4000 or TheWallis.org

[Chopin portrait in the collection of Hershey Felder... for more of my portraits of Hershey, check the COMPOSER SONATA page on this website] 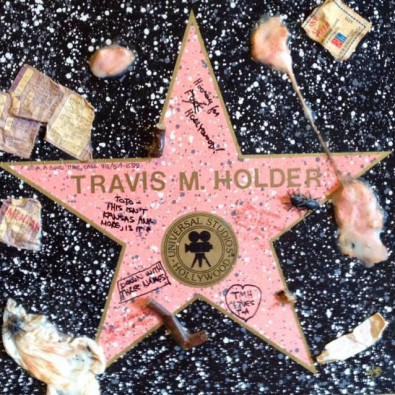 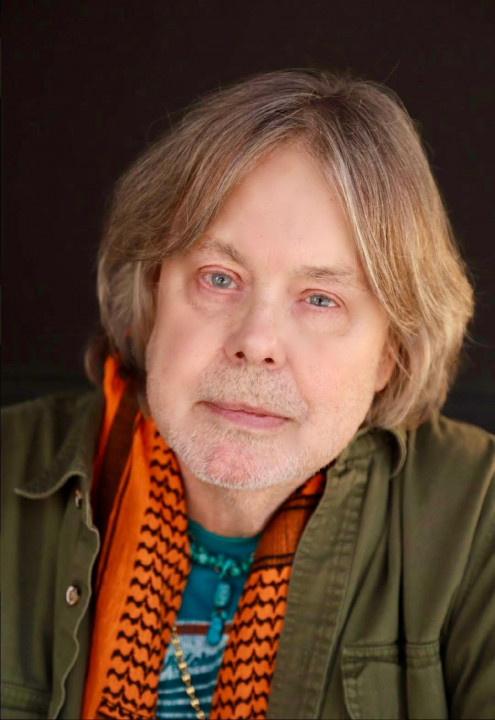 An actor since childhood, Travis Michael Holder has appeared in six Broadway productions and has toured in everything from Bye Bye Birdie; The King and I; Inherit the Wind; Oh Dad, Poor Dad…; Hair; and throughout Europe and Asia in Hello, Dolly—all before being tapped at age 20 to Go West, Young Innocent, under contract to Paramount Studios. He then suddenly found himself relocating to Lost Angeles, a desolate place where his first love for theatre and live performance made him a stranger in a strange land dwarfed by the omnipresent Hollywood film industry.

Still, although quickly succumbing to the ease, lifestyle, and availability of good drugs in El Lay, he steadfastedly refused to abandon his passion for the stage, a decision that resulted in his dismissal from his studio when he grew his hair long and against their objections joined the cast of Hair.  His obstinance led him through the years to recognition from the Los Angeles Drama Critics Circle Award for Leading Performance by an Actor as Kenneth Halliwell in the west coast premiere of Nasty Little Secrets at Theatre/Theater; another LADCC Award as part of the ensemble cast of Stupid Fucking Bird at the Boston Court Performing Arts Center; a Drama-Logue Award as Lennie in Of Mice and Men; a ReviewPlays.com Award as Brian in The Shadow Box; Maddy Awards as Greta in Bent, Shelley Levene in Glengarry Glen Ross, and as Tennessee Williams himself in Lament for the Moths: the Lost Poems of Tennessee Williams; a Sage Award for The Hurricane Katrina Comedy Fest; six acting nominations from LA Weekly; Ovation, GLAAD, NAACP, and five Garland Award nominations.  He has toured extensively as Amos “Mr. Cellophane” Hart in Chicago and regionally, he has been honored with an Inland Theatre League Award as Ken Talley in Fifth of July, three awards for direction and performance as Dr. Dysart in Equus, and he was up for Washington, DC’s Helen Hayes honors as Oscar Wilde in the world premiere of Oscar & Speranza.

As a playwright, Travis’ Looking South on Cahuenga Hill, L.O.L., STR8 2 PRDRS, and River and Other Phoeni Rising have been produced nationally and his first semi-autobiographical play Surprise Surprise, which originally debuted at the Victory Theatre Center in 1994, became a cult favorite 2010 feature film with a screenplay he adapted with producer-director Jerry Turner and featuring Travis in a leading role. His theatrical directorial credits include Dracula, Bye Bye Birdie, Equus, Stupid Fucking Bird, Other Desert Cities, The Laramie Project: Ten Years Later, Tennessee Williams' The Purification and Small Craft Warnings, Brecht on Brecht, Bleacher Bums, A Midsummer Night's Dream, and Dark of the Moon.

Once again ignoring the many warnings about the pitfalls for an actor to do such a thing, Travis began his three-plus-decade career as a Los Angeles theatre critic in 1987, serving as Theatre Editor for Entertainment Today  for 21 years and reviewing weekly for Back Stage for 12 years. He was editor of Los Angeles Theatres Magazine and managing editor for both the Beverly Hills Post and West Hollywood Weekly, wrote monthly columns about music and Las Vegas entertainment in Salon City Magazine, and was a longtime contributor to Arts In LA before establishing TicketHoldersLA.com in 2017.  A former member of the LA Drama Critics Circle, Travis holds the singular distinction of being the only member in the organization’s half-century-plus history to have been recognized with an award as an actor—not to mention twice.

Taking a highly successful detour into the insanity of the music industry in his 20s, Travis toured the globe with Dusty Springfield, The Doors, and Loggins & Messina before settling in as Talent Coordinator at the infamous Troubadour in LA and San Francisco, staying on in SF when Troubadour North became The Boarding House before he embarked on a breakneck career producing concerts nationally and interntionally.

Contrary to what was presented as fact in Lee Hall's somewhat fantasized screenplay for the film Rocketman, it was Travis and not his majorly resistant boss Doug Weston who introduced Elton John to the US in his first stateside appearance and he was also responsible for bringing Bette Midler to the west coast on her inaugural national tour. He was instrumental in helping to launch the careers of, among others, such icons as Joni Mitchell, Laura Nyro, Jackson Browne, David Foster, Robin Williams, Tom Waits, Glenn Frye, Steve Martin, Carole King, James Taylor, Billy Joel, David Byrne and The Talking Heads, Tim Buckley, Bonnie Raitt, Kris Kristoferson, Linda Ronstadt, John Denver, The Tubes, Rickie Lee Jones, and Cheech & Chong.

Travis maintains an active schedule as a private film and television acting coach in Los Angeles and, from 2010 to just before the world fell apart in 2020, he taught acting, theatre history, Media in Society, and directed BFA production workshops at the New York Film Academy’s west coast campus. He has also appeared several times since 2003 in performances and seminars at the Tennessee Williams Literary Festival in New Orleans, an annual event which led him to Knowing What It Means to Miss You Know Where on a daily basis.

His first novel, Waiting for Walk, a memoir of growing up as a child actor, has been sitting in a desk drawer since its completion in 2005, proving there is often a deep divide between talent and functionality. If you’re a glutton for punishment, you can access it elsewhere on this site. 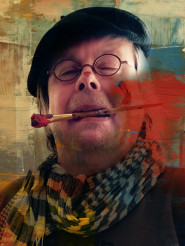 As a painter and artist, Travis, who has always been known for grandiloquent exaggeration, might possibly say he began painting—or thinking about doing so—in the womb, but the toxicity of the components in a tube of oil paint might prove that claim as preposterous as it sounds. Still, there is the possibility that his mother was immune to such a malady, as Travis’ earliest memories involve sitting in rapt awe at his mother’s side as her graceful hands created the most astonishing watercolors he has to this day ever seen created.

By age 8, the time Travis was beginning his career as an actor, he was also painting himself and, by age 13 and with his mother’s blessing, became the youngest person ever accepted to study life drawing at the Art Institute of Chicago. Through his early years, he won numerous scholastic art awards and subsequently two extremely successful showings of his work were mounted while still in his teen years, first at a well-known gallery on Chicago’s Rush Street at age 16 and another in the Old Town area at age 18. By that time, some of his canvases were already gracing the walls of, among others, Katharine Hepburn and Phyllis Wilbourn, Ginger Rogers, Jerome Robbins, and Tennessee Williams, who also in turn painted Travis at the ripe age of 14.

Travis’ early works, surely inspired by his mother, were watercolors and pen-and-ink drawings, many mentored by abstract artist Eleanor King Hookum until noted Chicago artist, the late Barbara Lewis, guided his hand into the world of oil painting. His first oil was a portrait of Rudolf Nureyev, a canvas the dancer quite vocally made clear he totally despised.

Over the years, Travis’ passion for art dwindled in the shadow of his careers in acting and the music business, something not only due to having no time to paint but running out of space to display his work in his collection-obsessed home and also running out of friends with empty walls to gift with his artwork.

One of the things that led him back to the studio was the encouragement of the late legendary playwright/scholar Dr. Leon Katz, who fell in love with his work and, when mounting his play Beds in 2000, asked Travis to create a portrait of Oscar Wilde to adorn the program for the play’s debut, a production in which Travis appeared as the dying literary genius.

Between that new beginning and other factors, including a newly discovered passion for photographing and painting the colorful scenes and equally colorful denizens of New Orleans’ French Quarter, as well as the lack of roles being offered him in his later years unless a script calls for an erring priest or mentally-challenged adult, Travis again took up his brushes and started to express himself with the passion he had fostered in his youth.

Thanks to the advent of social media, his work became available to a whole new audience not only incredibly complimentary and encouraging towards Travis’ ever-fluctuating confidence in himself as an artist, but willing to shell out a few ducats to help finance his sorrowful lack of retirement savings.

Since the 2017 season, eight of his paintings of N'awlins street scenes have been featured on Queen Sugar, creator/director Ava DuVernay's NAACP Award-winning TV series co-produced by Oprah Winfrey for her OWN Network. Also in 2017, his canvases began gracing the walls of the historic Charlie's Steak House in uptown New Orleans. In 2018, an exhibit of his work accompanied the run of Michael Michetti's updated production of A Streetcar Named Desire at the Boston Court Performing Arts Center, coincidentally starring his friends Maya Lynne Robinson and Desean Terry as Stella and Stanley.

In March, 2019, a collection of his Tennessee Williams portraits and paintings of Tenn’s beloved French Quarter haunts were installed at Off the Beaten Way Gallery on Royal Street in New Orleans, the opening of the exhibition coinciding with the 33rd annual Tennessee Williams Literary Festival. In the midst of the highly successful run, the gallery was forced to close down as a victim of COVID-19 but his 24 canvases featured there were transferred and remain on display at New Orleans' wildly eclectic Esplanade Jungle.

A collection of Travis’ canvases were recently featured at the annual Chocolate and Art Show at the Vortex in the downtown Los Angeles Art District and in 2020 he completed eight commissioned portraits of acclaimed solo artist/pianist extraordinaire Hershey Felder, depicting him in each of his celebrated “Composer Sonata” characterizations: Debussy, Tchaikovsky, Gershwin, Chopin, Beethoven, Liszt, Irving Berlin, and Leonard Bernstein.

Interestingly enough, today, when Travis creates a new canvas, his paint-splattered hands bring him a great sense of contentment and a long-missed sense of being in the right place, as his own hands so remind him of his mother’s as he sat quietly all those years ago at her side watching her create magic right before his very eyes. 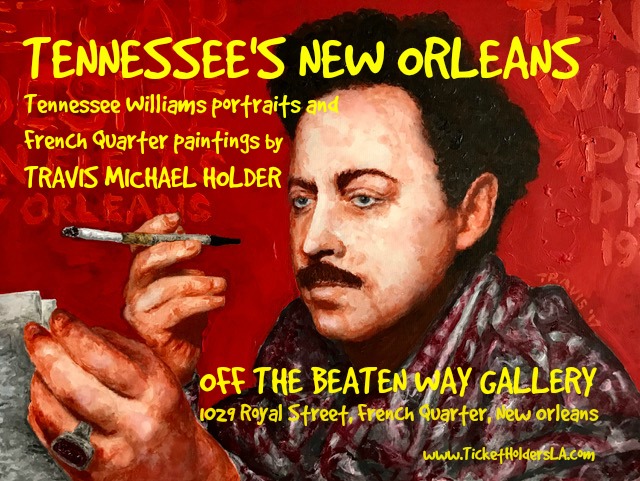 If you're interested in seeing more of my work, check out eight handydandy collections of my art on this site 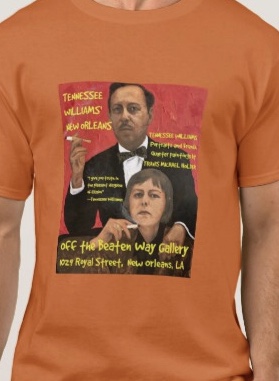