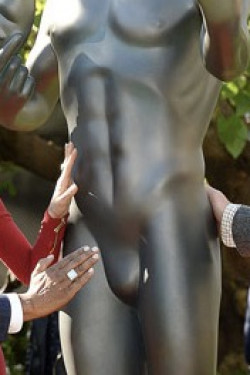 Over the last two years, although my 29th and 30th annual TicketHolder Award winners were all extremely worthy of the recognition, the pickins’ were mighty slim since the pandemic so totally devastated theatre in LA—and everywhere else, for that matter. The list of shows and performances from which to choose was extremely limited. This year, it’s the opposite; the abundance of exceptional live performances presented in our reclaimed desert climes has been staggering.

For me, the standout category for consideration in 2022 has been the plethora of brilliant ensemble casts. Aside from my ultimate winner, Antaeus’ knockout Everybody where six actors had to learn six parts and who played which role was decided by onstage lottery as the performance began, I have also posted 11 runners-up for the top prize and truly, all of them were equally impressive.

The other conundrum this year has been something rattling around in my brain for several weeks now. Each year, I award a TicketHolder to one Los Angeles theatre company I consider to have mounted the most impressive season. This year, I simply cannot single out one organization that has worked harder than any other—and all our hardworking and financially devastated theatre companies, from the largest to the tiniest, are struggling to get butts back in the seats.

For this reason, instead of awarding one award for Best Season, I am presenting it to our entire community as a whole. The amount of unstoppable energy and inventiveness generated, as everyone trying to create art in a vacuum has been met with even more obstacles than usual, is beyond contemplation. I am so proud of our stalwart producers of theatrical wonder in our city at every level. Each and every one of them deserves our gratitude—and our help.

If I Forget, Fountain Theatre

To Kill a Mockingbird, Pantages Theatre

Metamorphoses, A Noise Within

Chopin in Paris, Wallis Annenberg Center for the Performing Arts

Radio Golf, A Noise Within

Anna in the Tropics, A Noise Within

Animal Farm, A Noise Within

SPECIAL MOST DRIVEN AND PROLIFIC MAN OF OUR TIME AWARD

The Assembly, Parts One & Two

Mozart and Figaro in Venice